Crontab Reboot: How to Execute a Job Automatically at Boot

Home » Backup and Recovery » Crontab Reboot: How to Execute a Job Automatically at Boot

The Cron daemon is a Linux utility used for scheduling system tasks and processes. It uses cron tables (crontab) to store and read scheduled jobs.

This tutorial will cover how you can use crontab to schedule jobs to be run at system reboot. 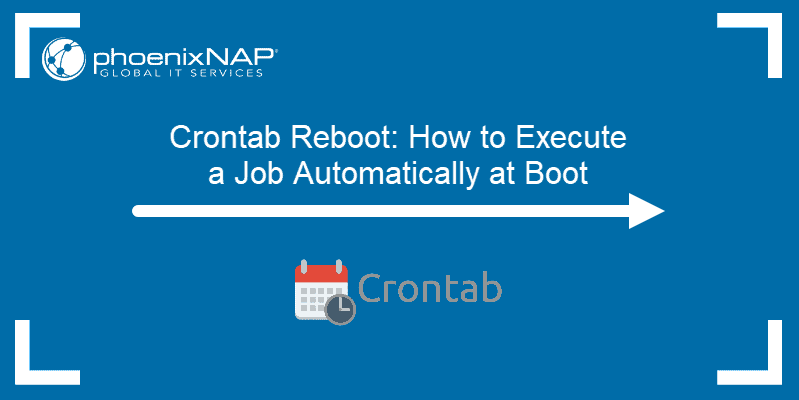 With the crontab command, you have full control of when and how jobs are executed. Use crontab to set job execution time down to the minute, without the need for looping and timing logic in the task.

crontab has low resource requirements since it doesn’t reserve system memory when it isn’t running.

Crontab on Boot: Run a Cron Job at Boot Time

Open the cron task list by using the following command:

If you have multiple text editors installed, the system prompts you to select an editor to update the cron task list with. Use the number in the brackets to choose your preferred option. We will be using the default option, Nano.

To run a cron job at every system boot, add a string called @reboot to the end of the task list. The job defined by this string runs at startup, immediately after Linux reboots.

Use the following syntax when adding a @reboot string:

Note: Always use the full path to the job, script, or command you want to run, starting from the root.

Press Control + X to exit Nano, then Y and Enter to save any changes you made.

For example, if we wanted to have the system date written in a file called date.txt when Linux restarts, we would add the following string:

If we wanted to run the backup shell at reboot, we would add: 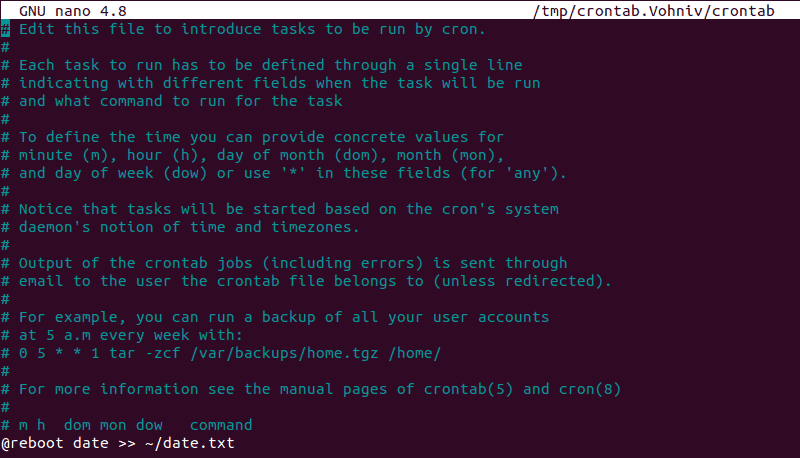 Note: In some cases, the crond service needs to be enabled on boot for the configuration to function.

To check if the crond service is enabled, use:

To enable this service, use:

Run a Cron Job at Boot With Delay

To run a job with a delay after the system reboots, use the sleep command when adding the @reboot string:

If you want to create a text file with the system date five minutes after reboot, add:

Each @reboot string you add to the cron task list runs a job every time Linux restarts. If you no longer wish to run a job, remove it from the task list.

To do this, open the task list using the crontab -e command. Scroll down to the bottom to review the jobs you added.

After following this tutorial, you understand how to use crontab to schedule jobs to run at system reboot.

For more ways to schedule jobs in crontab, check out our guide to setting up cron jobs.

Aleksandar Kovačević
Aleksandar Kovacevic is an aspiring Technical Writer at phoenixNAP. With a background in both design and writing, he aims to bring a fresh perspective to writing for IT, making complicated concepts easy to understand and approach.
Next you should read
Bare Metal Servers SysAdmin
Introduction to the Linux File System
A file system is a set of processes that controls how, where and when data is stored and retrieved from...
Read more
Networking SysAdmin
How to Use the hostname Command in Linux
The Linux hostname command lets you view your computers domain, hostname, and IP address. You can also use it...
Read more
Bare Metal Servers SysAdmin
How to Create Partitions in Linux
In Linux systems, in order to use storage devices such as Hard Drives and USB drives, you need to understand...
Read more
SysAdmin Web Servers
Linux Commands Cheat Sheet: With Examples
A list of all the important Linux commands in one place. Find the command you need, whenever you need it or...
Read more
© 2021 Copyright phoenixNAP | Global IT Services. All Rights Reserved.