Introduction to the Linux File System

A file system is a set of processes that controls how, where and when data is stored and retrieved from a storage device. An efficient file system is essential for everyday system processes.

The Linux kernel supports various file systems, but the most commonly used is the ext4 file system.

In this article, you will learn more about the development of Linux file systems and the main features of the ext4 system. 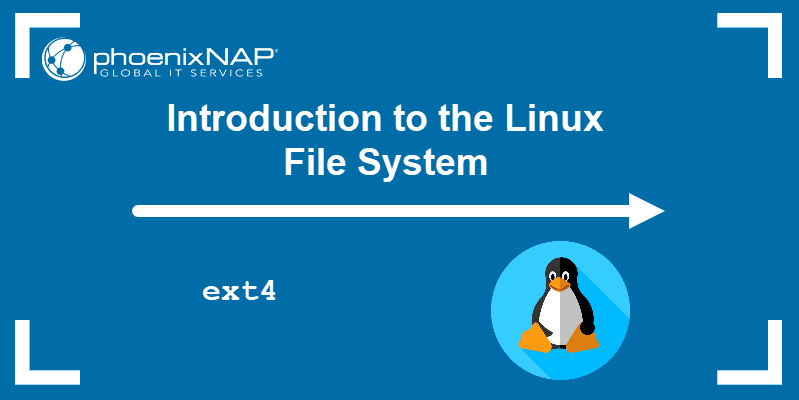 Note: In Linux, everything is stored as a file (e.g., directories, printers, partitions, kernel data, etc.). That makes it all the more important to learn how the Linux file system works.

Let’s take a closer look at the evolution of the Linux file system:

The Minix file system supported the Minix operating system. It was first introduced in 1987 by Andrew S. Tanenbaum.

The Minix operating system and its file system were mostly used for educational coding purposes. The performance of the file system was not up to standard at the time. Filename lengths were restricted to fourteen characters, and partitions were limited to 64MB. At the time, hard drives supported partitions up to 140MB.

By 1992 Minix was mostly out of use due to lack of performance and development of the ext file system.

The ext file system stands for “Extended File System”. It was the first file system designed to support the Linux kernel.

While it managed to solve issues that the Minix file system had, it had one major flaw – timestamping. Unlike today where each Linux file has three timestamps (access timestamp, modified timestamp, and changed timestamp), the ext file system allowed only one timestamp per file.

In January 1993, the ext2 file system was introduced. In time, all users switched from ext to ext2.

Remi Card designed the ext2 file system and released it in January 1993, less than a year after introducing the ext file system.

The ext2 file system enabled the retention of the internal structure while the file system functionalities extended. Data from files were kept in data blocks of the same length. The ext2 file system supported the maximum file size of 2TiB. Filename lengths were not limited in characters, but in bytes – 255 bytes. It did not support journaling.

While this file system was largely used, it still had two major issues:

The ext2 system was mostly used until the early 2000s when the ext3 file system was introduced. It is occasionally used today for USB devices because it does not support the journaling system.

Stephen Tweedie designed the ext3 file system (Third Extended File System). It launched in November 2001 with Linux kernel 2.4.15. It is still in use today.

The journaling system keeps a “journal” of all changes in the data structure that are yet to be commited. In case of power loss or system crash, logs stored via the journaling system return data in a manner of seconds, reducing the risk of corruption or data loss. The system writes the data in the correct areas of the file system when the log is updated.

Features of the ext4 File System

Let’s look at the main features of the ext4 file system. 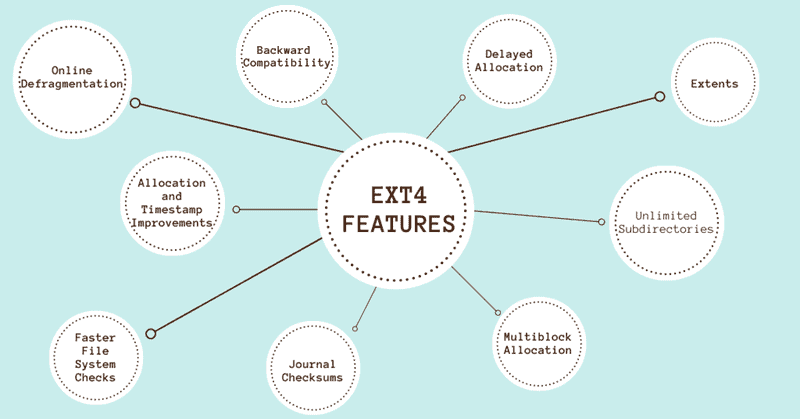 The ext4 file system supports backward compatibility with ext3 and ext2 file systems. An additional feature is the automatic mounting of the ext3 file system in ext3 mode by using an ext4 driver.

The ext4 file system allocates storage blocks more efficiently prior to writing them to the disk. That improves read and write performance.

The ext4 file system adds another 408 years to the timestamp and supports dates up to May 10, 2446. Timestamps are also measured faster, in nanoseconds.

Outdated versions of the ext file system map all the blocks that correlate with each file. The process does not work when it comes to large files that require a high number of blocks. Extents have resolved the problem in the ext4 file system.

Extents reduce the amount of metadata required to map each file’s blocks. The system saves the address of the first and last block corresponding to the large file.

A block allocator searches for free blocks that can be used to write data to the disk. The ext4 file system uses multiple allocations that allow the allocation of multiple blocks per call. This reduces disk fragmentation.

The delayed allocation feature allocates blocks only when the file is written to the disk. With this feature, cache memory is not filled with unnecessary data, and the performance of the system increases.

The ext4 file system uses the checksum option. This option was introduced to reduce the risk of file corruption.

The journaling system is the most used part of the disk. When hardware failure occurs, the blocks become unusable and file corruption occurs. The checksum option constantly checks to see if a block is damaged. This process also improves performance because it shortens the journaling time.

In an ext4 file system, undistributed groups of blocks and inode tables are marked. The time required to run the fsck command is significantly shortened because marked groups are skipped. It improves overall performance.

Disk fragmentation leads to performance degradation, which was a significant issue with the ext2 and ext3 file systems. The ext4 file system supports the e4defrag tool that lets users defragment individual files or the complete file system.

Although the ext4 file system is considered as the best file system for Linux distributions, there are a few limitations that should be considered in the further development of the system:

There are several alternatives to the ext4 file system. The Linux kernel supports all the alternatives listed below.

XFS is a 64-bit file system that was first introduced in 1994 and built into the Linux kernel since 2001. It is the default file system for RedHat Linux.

XFS supports a maximum file size of 8 EiB and restricts filename length to 255 bytes. It supports journaling, and like ext4, it saves the changes in a journal before changes are committed to the main file system. This reduces the possibility of file corruption.

Data is structured in B+ trees, which provides efficient space allocation and therefore increased performance.

This system’s main disadvantage is reflected in the difficult resizing process of an existing XFS file system.

OpenZFS is a platform that combines file systems with volume managers. It was first introduced in 2013.

OpenZFS supports a maximum file size of 16 EiB and limits the maximum filename length to 255 characters. Some of this system’s features are protection against data corruption, encryption, support for high storage capacities, copy-on-write, and RAID-Z.

OpenZFS’ main disadvantage is the legal incompatibility between CDDL (OpenZFS) and GPL (Linux kernel) licenses. That is resolved by compiling and loading the ZFS code to the Linux kernel.

BtrFS supports a maximum file size of 16 EiB and limits the maximum filename length to 255 characters. Some of the BtrFS’ features are online defragmentation, online block device addition and removal, RAID support, compression configurable per file or volume, file cloning, checksums, and the ability to handle swap files and swap partitions.

The Linux file system evolved for decades to gain its complexity and functionality. Each new functionality resolved an issue present in the outdated versions of the system.

After reading this article, you should have a better understanding of the Linux file system and how it functions.

Next, consider learning about data backups in our article Snapshot vs Backup.

Nevena Pavlicic
Nevena Pavlicic is an aspiring Technical Writer at PhoenixNAP with experience in writing user manuals and blog posts. She has always enjoyed researching and building knowledge on cutting edge technologies, but she is also passionate about simplifying complex concepts.
Next you should read
Bare Metal Servers SysAdmin
How to Mount NTFS Partition in Linux
In Linux, an NTFS partition is accessed in dual-boot setups where file exchange between drives is required...
Read more
Bare Metal Servers SysAdmin
How to Delete Partition in Linux
Creating and deleting partitions in Linux is common because users must structure storage devices (USB and...
Read more
Bare Metal Servers SysAdmin
How to Create Partitions in Linux
In Linux systems, in order to use storage devices such as Hard Drives and USB drives, you need to understand...
Read more
DevOps and Development SysAdmin
19 Crucial Linux ls Commands to Know
The ls command (short for 'list') lists information about directories and any type of files in the working...
Read more
© 2021 Copyright phoenixNAP | Global IT Services. All Rights Reserved.