How to Use the wall Command in Linux

Scenarios in which multiple users use SSH to work on a server simultaneously are common in the Linux world. When system administrators perform system maintenance tasks, they need a quick way to inform users they should save their work and log out.

In this tutorial, you will learn how to use the wall command in Linux. This command allows sending terminal messages to all logged in users at once. 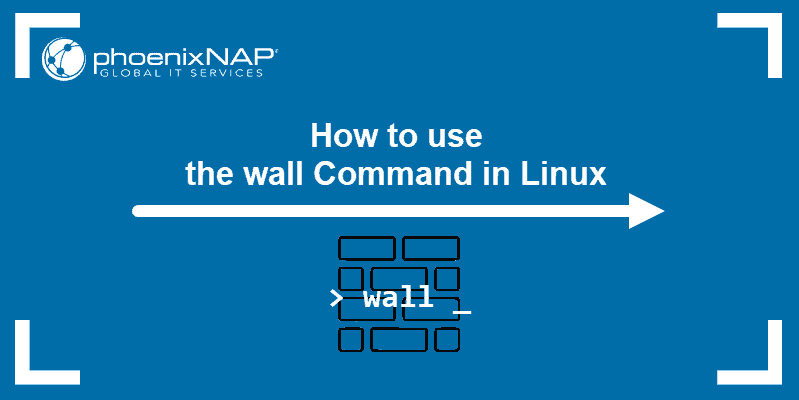 Note: wall is a terminal-based command. Users working in a GUI without a terminal window open will not see wall notifications.

What Does the wall Command Do?

wall is short for write to all. The purpose of the command is to send a quick message to the terminals of all currently logged in users.

The syntax of wall is straightforward. The command is followed by options and either the text of the message or a filename:

Below is a list of all the options wall takes, along with examples of the command use.

The basic way to use the Linux wall command is to type it before a message you want to send, without any added options.

The users receive the message in the following format:

Note: Use the wall command sparingly. It was designed for communicating essential pieces of information, so it reaches all the logged in users under all conditions. Frequently using the command when there is no need for it may disrupt the workflow for some users.

Add a Timeout to a Message

If the contents of the message become irrelevant after a certain period, use the -t (--timeout) option to limit the time during which the system attempts to deliver the message:

Users who log in after the allotted time expires do not receive the message.

Broadcast a Message Without the Header

To exclude the header text preceding the message, use the -n (--nobanner) option:

The system now displays only the contents of the message:

1. To write a message containing multiple lines, type the wall command and press Enter. The terminal provides the user with space to enter the message.

2. Once you finish writing, press Ctrl+D to end the input and send the message.

The system displays the multi-line message on the users’ screens:

Broadcast a Message from a File

To use text contained in a file as the wall message, write the filename after the wall command:

The output for the users receiving the message looks the same as in the previous examples:

Broadcast a Message to a Group

Limit the reach of the wall command to include only a certain group of users by using the -g (--group) option:

In the example above, only the users belonging to testgroup receive the message.

Use the wall Command with echo

Another way to send a message using wall is to pipe the output of  the echo command into wall using the following syntax:

Use the -V (--version) option to see the installed wall utility’s version information:

After reading this tutorial, you should understand how to use the wall command in Linux. The tutorial covered all available options and offered practical examples of using the command.

Marko Aleksic
Marko Aleksić is a Technical Writer at phoenixNAP. His innate curiosity regarding all things IT, combined with over a decade long background in writing, teaching and working in IT-related fields, led him to technical writing, where he has an opportunity to employ his skills and make technology less daunting to everyone.
Next you should read
SysAdmin
Echo Command in Linux (With Examples)
The echo command prints out a text string you provide as the output message. This tutorial covers the echo...
Read more
SysAdmin
How to Use the Linux xargs Command
While some Linux commands take input both from the standard input (stdin) and as a command-line argument...
Read more
SysAdmin Web Servers
How to Use the Linux tee Command
https://phoenixnap.com/kb/linux-tee By default in Linux, a command received through standard input writes directly to standard output...
Read more
SysAdmin Web Servers
Linux Commands Cheat Sheet: With Examples
A list of all the important Linux commands in one place. Find the command you need, whenever you need it or...
Read more
© 2021 Copyright phoenixNAP | Global IT Services. All Rights Reserved.